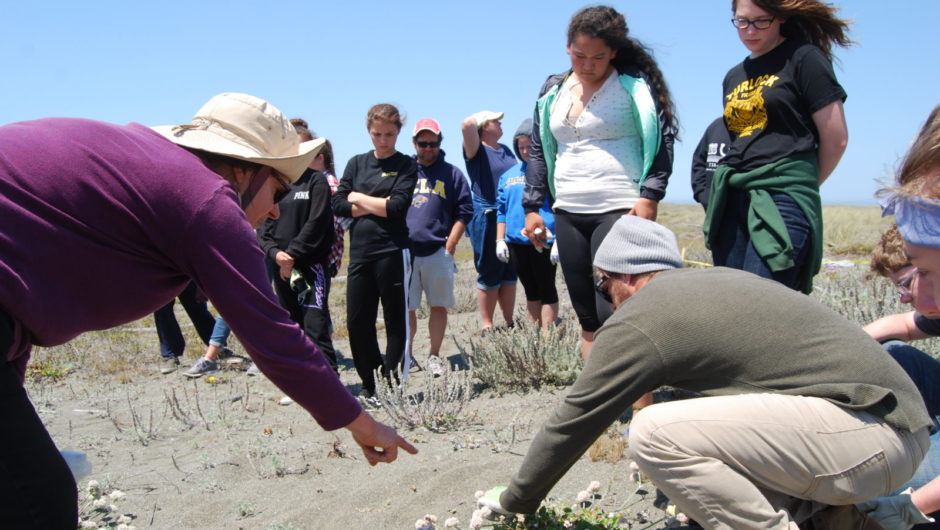 By Tara Dettmar of the Tolowa Dunes Stewards near Smith River, CA

The Tolowa Dunes Stewards (TDS) are a small group of dedicated volunteers and part time employees working to restore and conserve a section of the Northern California coastline. Known regionally as the Tolowa Coast, this land is the aboriginal territory of the Tolowa people who have lived here since time immemorial. And for good reason! The Tolowa Coast is home to some of the most diverse plant and wildlife species in the state and was once able to provide abundant resources to the Tolowa people.

Nowadays abundance has all but disappeared and that diversity is being compromised. Notably, European beachgrass (Ammophila arenaria) introduced in the mid 1800’s has since eradicated nearly all native dune plants, not only on the Tolowa Coast but in coastal dunes from California to British Columbia. This grass grows rapidly, outcompeting other plants and keeping the sand dunes from moving around as their dynamic nature intended. When the sand dunes grow artificially tall and plant diversity disappears, wildlife suffers as well. Food sources are lost and critical habitat disappears.

Take the Western Snowy Plover for example. This small shore bird needs flat, open sand dunes which enable them to see predators from afar. European beachgrass has nearly eliminated that habitat and the Snowy Plover is now listed as a threatened species under the Endangered Species Act.

European beachgrass has nearly eliminated that habitat and the Snowy Plover is now listed as a threatened species under the Endangered Species Act.

This may sound grim but not all is lost. The efforts of our small group have been bolstered by one very BIG partnership. For the past 5 years we have been partnering with the Sierra Service Project and together we have been doing the impossible. Every summer hundreds of volunteers descend upon the dunes for a day of restoration. We pull out the invasive grass in large quantities. We talk about the native dune plants and the animals that benefit from this work. And most of all, we have a great time. By the end of the summer, staff members feel like family and year after year we look forward to seeing people return.

For the past 5 years we have been partnering with the Sierra Service Project and together we have been doing the impossible.

Removing European beachgrass is difficult, time consuming, and can feel downright hopeless when you look out at all the grass beyond. But the power of service and commitment has prevailed. This continued partnership has helped to restore 5.5 acres of dune ecosystem. What does that number mean you ask? Well, a lot of things.

For starters it means we are seeing positive results with the return of endemic plant species. In one recent count at our restoration site we found 200 Phacelia argentea or more commonly, silvery phacelia – a small but remarkable dune plant that grows almost exclusively in the Tolowa Dunes.

Additionally, restoring 5.5 acres with an all volunteer work force is a feat that has not gone unnoticed. Recently a state organization called the Wildlife Conservation Board noticed our volunteer led efforts and invited the Tolowa Dunes Stewards to apply for a large grant to aid our restoration efforts. We were awarded that money and have some exciting restoration projects lined up. And we could not have done it without the hard work and dedication of the Sierra Service Project. We are looking forward to big changes ahead and another great season with SSP!

This continued partnership has helped to restore 5.5 acres of dune ecosystem.

Editor’s Note: The Tolowa Dunes Stewards are joining us as members of SSP’s inaugural Community Advisory Council. We are excited to fortify our community partnerships and find creative new ways to serve.