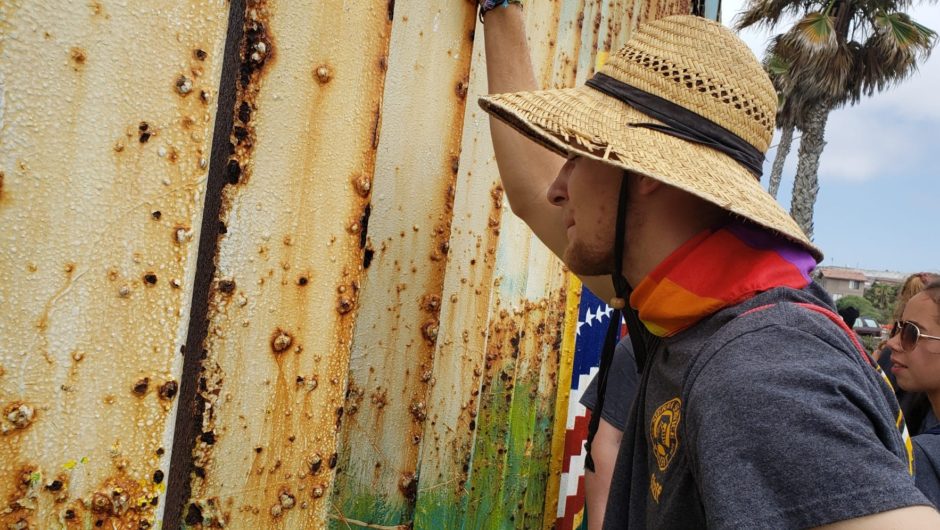 Sierra Service Project’s site based in San Diego is blessed to have strong connections including nonprofit organizations, community advocates, church congregations, and binational partners. This summer, we invited Pastor John Griffin-Atil (Executive Director of the Imperial Beach Neighborhood Center), Robin Echols-Booth (Volunteer Coordinator at the Tijuana River National Estuarine Research Reserve), and Pastor Guillermo Navarrete (El Faro Border Church) to be guest speakers at the Community Crossing sessions during our online program. These speakers captured the spirit of our binational community work that has been developing since 2015 (although we have worked with Guillermo since 2008!)

One of the highlights of our program this summer was working with Guillermo and the shelter he works with in Tijuana, called Roca de Salvacion. Learning from Guillermo and visiting this shelter has been a valuable aspect of Adventure Wednesday for participants and staff, allowing for relationship-building and understanding between communities. This summer, we were thankful to find ways to creatively connect with youth in the shelter through bilingual Zoom conversations. Guillermo and Ryan facilitated a conversation in which youth in both countries were able to learn from each other and practice their language skills. Topics ranged from favorite ice cream flavors to the social and political differences between the United States and each youth’s home country in Latin America.

“Learning from Guillermo and visiting the shelter has been a valuable aspect of Adventure Wednesday for participants and staff, allowing for relationship-building and understanding between communities.”

For our daily Community Crossing sessions, we wanted to include an activity that would allow participants to connect with the community using the knowledge they gained from our speakers, as they would during an in-person program. Our community project, related to the bilingual conversation, included a fundraiser for the migrant shelters in Tijuana. Participant program fees during an in-person summer would typically provide honorariums for speakers, so we prioritized these fundraisers to make sure we could still support our community partners. As a staff team, we originally set out with the goal of raising $400, but were able to raise over $2,500 for the shelters. This is thanks to a two-part fundraiser which allowed us to share our service this summer with the SSP community as a whole.

The first part of this fundraiser entailed the San Diego staff team spending the first week of the online summer making friendship bracelets. The idea was to sell the bracelets in pairs; if you bought one, the other would go to a youth in a migrant shelter in Tijuana. All the funds from each purchase will be donated to the shelters, which amounted to a total of $528 through friendship bracelet orders alone! We also invited each donor to write a message of hope in the order notes, which were translated into Spanish and attached to the bracelet that will go to Tijuana.

“The idea was to sell the bracelets in pairs; if you bought one, the other would go to a youth in a migrant shelter in Tijuana.”

In order to raise awareness for the shelters and the friendship bracelet fundraiser, Ryan ran for 12 hours straight at the end of the summer program, and invited his network to sponsor a certain dollar amount per mile – totaling over 50 miles! This proved to be a very effective method of raising funds. Most of the people who signed up to sponsor Ryan’s run were friends and family members of the San Diego staff team. We raised $2,003 for the running portion of the fundraiser. Combining both fundraisers, 48 donors raised $2,531 for the shelters, an amazing collective feat.

“Combining both fundraisers, 48 donors raised $2,531 for the shelters, an amazing collective feat.”

Over this summer it became evident SSP can be an organization focused on much more than a summer of hands-on service. One of the most intriguing ideas for year-round service opportunities came from Guillermo. The shelters in Tijuana are seeking to provide distance English classes for migrants during the pandemic. Guillermo has been installing computers into each building and is gathering English teachers to call in over Zoom to give lessons. We hope to coordinate with Guillermo to provide English lessons consistently throughout the year. Beyond being the site director this summer, Ryan is also SSP’s year-round Regional Coordinator in San Diego. He will be the main organizer of this project on the US side, and is excited to invite those who are interested in getting involved. We’ll be sharing more about this opportunity as the details develop during the fall of 2020.

“We hope to continue impactful collaborations with the binational community throughout the year by viewing service in new and creative ways.”

While the SSP’s 2020 summer season has concluded, we hope to continue impactful collaborations with the binational community throughout the year by viewing service in new and creative ways. Other opportunities for year-round service and learning might include offering talks from our guest speakers like Pastor John, Robin, Pastor John Fanestil of Via International, and US Border Patrol. Each talk could have a community project associated with it;we anticipate these opportunities will be beneficial while we are still social distancing! SSP’s San Diego site is blessed with so many community contacts we can continue partnering with over the years, whether from a distance or in-person, to make a meaningful impact throughout the year.

Editor’s Note: Have you served in San Diego with SSP? Share your ideas on how we can remotely connect with community partners during the 2020-2021 school year by completing our 2020 Program Interest Survey, due at the end of September. To learn more about San Diego’s summer program, visit our Instagram and Facebook pages and watch our summer program videos.