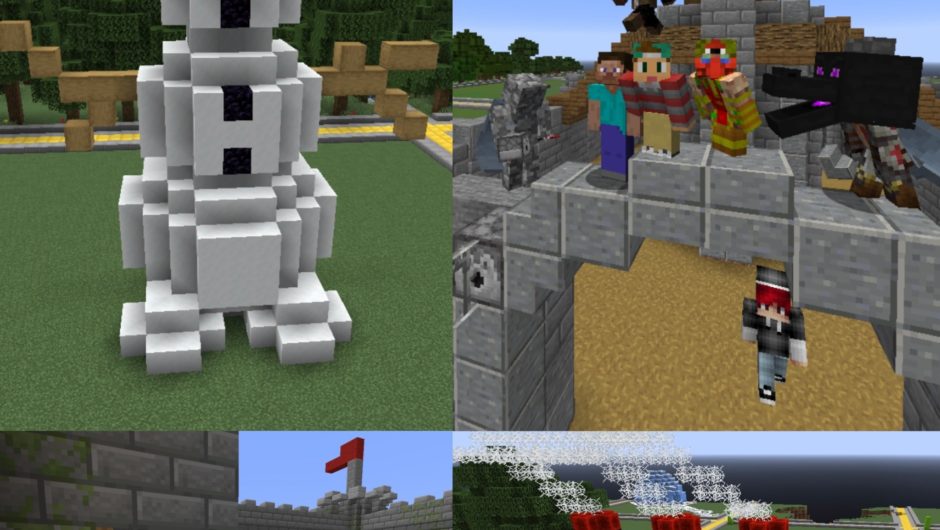 While large gatherings have been restricted, SSP has found a fun way to build community and join together anyway. Using the popular computer game Minecraft, groups of SSP staff and volunteers from all different sites come together virtually to form a community and express creativity each week.

“SSP has found a fun way to build community and join together anyway.”

Minecraft allows users to collect resources from a virtual environment and build their own worlds. During this afternoon SSP Adventure, fellow Tsaile staff member Zach Hendrix and I join each other on a private Minecraft server with large open plots marked with different colors. After everyone has introduced themselves and found an empty plot, a new round begins.

Each round has a theme to inspire and guide the building process. Everyone participating has the ability to fly and access to unlimited building resources so the only limiting factor is their imaginations…and the time limit! The themes have ranged from snow, to ocean, to space. The themes are kept relatively vague in order to keep the builds diverse and showcase everyone’s creativity. For example, to fit the ocean theme, people built submarines, deserted islands, pirate ships, coral reefs, aquariums, a whale blasting water, and more.

“The only limiting factor is their imaginations…and the time limit!“

Once the timer runs out, we all take some time to go around and admire everyone’s build. Everyone gets some time to explain their build and maybe even explain what could have been built if they had more time. It’s been really great to hear youth complimenting each other on their creativity and learning from one another. After looking at each build, we have an anonymous vote to see whose build was the round favorite. It is a build battle after all!

In order to mix things up and get participants to interact a bit more with each other, I created a summer-long build battle, putting not just the youth of each week against each other but putting the weeks against each other as well. Each week, the whole group is tasked with working together to build an extra- large structure to present at the end of the summer. Having everyone on one plot generated much more conversation and interaction which has been awesome, as everyone gets to add their own flair to the build.

SSP Minecraft has been a highlight for me and my fellow staff each week and I look forward to hosting it again in Week 4. Seeing others express themselves in their builds is amazing, but it’s even better when they build each other up with compliments or suggestions. These are the valuable ways we can maintain the community feeling of SSP, despite being physically separate.

“Seeing others express themselves in their builds is amazing, but it’s even better when they build each other up with compliments or suggestions.“

We finish by taking a group picture of everyone at the final group build, then we send them off. After they log off, I swing by and take a picture of everyone’s individual creations. As for the group build, we will post those pictures during Week 4, when all of the staff will vote on the week with the best build. All in all, this adventure has been great, and those who have joined Zach and I for some building are even better. I am so glad to have had the opportunity to set something like this up, and hope everyone who joined had a fun time and made new friends.

Editor’s Note: The final week of our online summer program begins on Monday, July 13. Sign up and don’t miss this great opportunity to build community – including all of our afternoon Adventures! Join Ronnie and Zachary on Tuesday from 2-3 and 3:30-4:30pm Pacific in Minecraft.