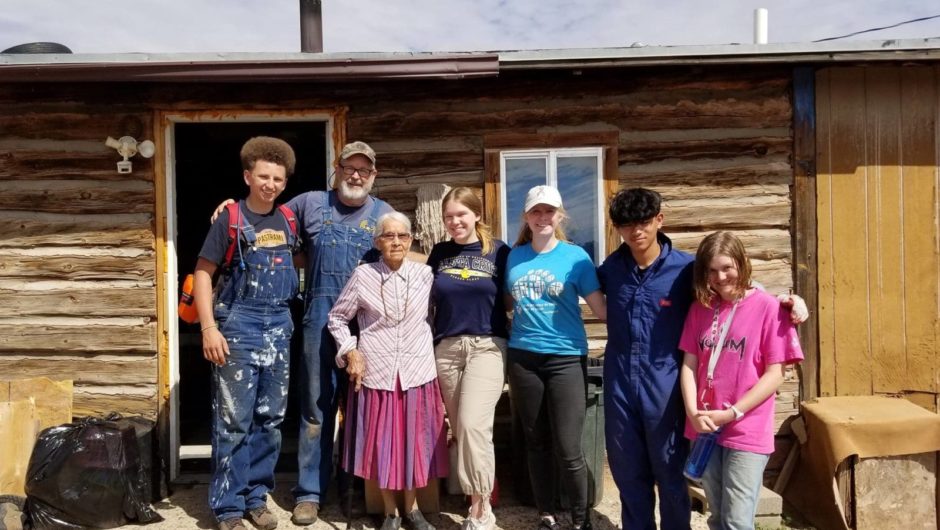 I have participated in SSP four times, in San Diego, Smith River, Spokane, and Tsaile, all at high school sessions. Through my trips with SSP, I have acquired a plethora of memories and experiences, each of them special in their own way. A few of these include learning about the rich history of Chicano-Americans in San Diego, racing to save the beautiful Tolowa Dunes outside Smith River from invasive European beachgrass, and strategically demolishing an awning on a twelve-foot-tall deck in Spokane.

If I had to choose just one significant memory, it would be from Tsaile this year. Dr. Silver Nez Perry, a Diné community leader, talked to our whole group about motivation and how to be successful in life. To hear such inspiring words come from a place one would not necessarily seek it out was especially intriguing. Silver’s words have stuck with me since then, and will be with me for a long time to come. These (and many more memories) have made SSP a formative and important experience for me.

“To be able to significantly impact the life of someone else, while simultaneously deepening your own faith and connecting with fellow Christians, is a special thing I am proud to be a part of.”

Sierra Service Project has somehow struck the perfect balance between church retreats and service projects. To be able to significantly impact the life of someone else, while simultaneously deepening your own faith and connecting with fellow Christians, is a special thing I am proud to be a part of. The duality of helping others while also helping yourself, although in different ways, is what truly has made SSP an important experience in my life that has yet to reach its final chapter.

SSP has given me so many great memories. Through each of my four trips with SSP, I have become enthralled with philanthropy and the deepening of faith. When I am older, I would love to be involved in the non-profit world, to help others find that same passion. This is why I have chosen to serve on SSP’s Board of Directors, to help others find their passion through service. Serving on the Board of Directors will allow me to give back to a worthy organization, and help other teenagers take advantage of opportunities to serve with SSP.

Editor’s Note: Will Wood is a senior that attends SSP with Pt. Pleasant United Methodist Church. He has been elected this year to serve as a youth representative on SSP’s Board of Directors. This article is featured in SSP’s 2018 Annual Newsletter; read all the stories written by youth volunteers, summer staff, and community members. Request a hard copy newsletter to be mailed to you.

MySSP Login
SSP's Group Registration Portal
First-come, first-served registration is open for SSP's summer of 2019! If you are your group's liaison, click the button to login to your MySSP account. 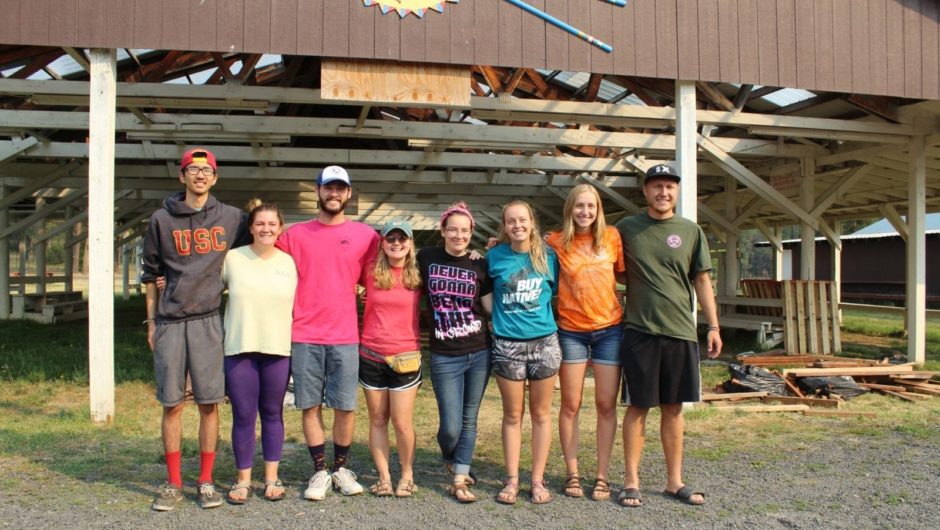 Since my first SSP experience, I had been excited to serve as a Staff-in-Training. For years I thought about how cool it would be to greet arriving groups, pour love on everyone’s meals, lead kitchen parties, and go FREDding. I knew it was going to be a lot of work, requiring patience, and pushing me out of my comfort zone.

I was right, but there were also so many things I didn’t expect. You can be told what it’s like to feed 70 people, but you won’t know until you’ve done it. I am grateful to learn what goes into making SSP with hands-on experience, and guidance from the amazing Spokane staff!

“SSP has opened me up to feel love for so many people. It has opened my mind and heart to help in any way I can; to find new ways to help others.”

Spokane is a community I always wanted to visit. On my long solo train ride, I found myself longing for something familiar, but I knew I wasn’t alone. With the strengthened bond I had with my youth group after my last week as a youth at SSP, I knew they were praying and thinking about me.

I learned last summer the love we experience at SSP, although it feels otherworldly and magical, can be found anywhere and in anyone. It’s something I have found to be thriving in my church. SSP has opened me up to feel love for so many people. It has opened my mind and heart to help in any way I can; to find new ways to help others. It’s given me something to look forward to in times when I thought I had no place to look forward.

It’s a place I’ve found I can be my truest and best self. SSP has inspired me to do this in everyday life, despite being challenging. I may no longer be a youth and have those same week-long adventures to look forward to, but now I have entire summers of serving to count down the days to.

Editor’s Note: Brigitte Steel has served as a youth volunteer with St. Andrew United Methodist Church in Santa Maria, CA and as a Staff-In-Training in Spokane this past summer. This article is featured in SSP’s 2018 Annual Newsletter; read all the stories written by youth volunteers, summer staff, and community members. Request a hard copy newsletter to be mailed to you.

Apply to be an SIT I Did Not Know

When I got hired by Sierra Service Project as a Food Service Coordinator, I only had an extremely vague idea of what was ahead of me. I only knew that I was looking forward to traveling to the United States for the first time and that I could not wait to meet my team and have the best summer of my life with them. 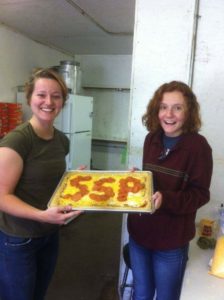 Juliette, left, with a Spokane volunteer making an SSP pizza.

I did not know that working for SSP would change my life.

At the beginning of the first day of Training, all I wanted to do was to go back home to France; I had cried all morning and I was exhausted due to the nine-hour time difference. But by the end of the day, meeting everyone, my team, the office staff, and spending the day hugging people, all I knew was that I never wanted to leave. 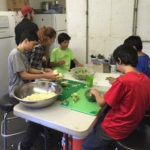 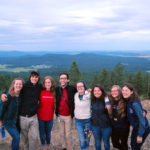 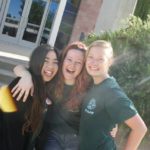 Throughout the summer, I grew as a person, as a team member and as a member of the SSP community. I was able to teach children how to do things that I loved doing, and in return they taught me a lot about life and how the world works. I got to inspire and be inspired by people I had never met before and will probably never see again. I tried food I had never had before, and I learned cooking skills that will forever be useful. I met people with their very own stories, people who were willing to share their feelings and thoughts with me because we had learned to trust each other. I met young people who have hearts so full of love they could explode. One wise youth told us that, “SSP is not a place you go to every summer, it’s a mindset”. I learned so much from such a short sentence. If you carry an open heart, if you open your arms to people and if you show unconditional love to anyone you meet, you do not need much more in life. That is the SSP mindset.

I met young people who have hearts so full of love they could explode.

SSP made me realize that I am capable, loved and that I have the right to be part of a loving, caring and supportive community no matter where I am. SSP showed me that I could do anything I wanted and made me feel at peace with the world. SSP gave me friends for life, friends I never thought I would end up having such an intense connection with, friends I am going to miss every day until I get to see them again. SSP gave me a purpose and the best summer of my life.

Editor’s Note: Registration for the 2017 summer will be on a first-come, first-served basis starting October 24. Email Veronica Russell with your questions! Applications for the the 2017 summer staff will be made available in early winter. Life presents many opportunities, and some people say you only get one chance. Being blessed with my trip to Spokane has given me a second. Once again my experience has renewed my confidence in the youth of our congregation at Central UMC. They now have been infused with the idea that by giving you get much more than receiving. They now have been infused with the idea that by giving you get much more than receiving.

The exposure to new and challenging activities has increased their confidence and concept of teamwork. Nobody is a success without being part of a community, and that sense of community has been infused in them. There is something about eating peanut and jelly sandwiches that really causes you to stick together and levels the playing field. The spiritual sandwiches that we had each day at lunch caused them to focus on the spiritual side of life and not simply feeding their stomachs. They now understand that being an adult requires that you think not only of yourself but how you fit into society and hopefully make a difference.

Editor’s Note: Check out photos from Rupert’s time in Spokane. If you would like to support SSP’s programs, please consider making a tax-deductible donation today.